I’m trying to tell myself:

I am a writer.

Mostly for fun, sometimes seriously, hardly intentionally and always surprisingly when I get a response. A nice “that’s great, keep doing what you’re doing, I’m amused” kind of response. But even if I don’t get the good stuff back, I’m always taken aback that people actually bother to read what I’ve written and I’m honoured they take the time to respond.

If you’re reading this: Thank you. Thank you so much.

Are writers not all wrinkled and grey and quiet and withdrawn and look at life over the top of their glasses? Don’t they sit in black and white, surrounded by shelves that are dusty and bent out of shape because of the weight of too many leather bound books? In a room that’s dark and airless. There they write. And wrote. And wrote by hand to author timeless classics, without keyboards or spell check or thesauruses.

Stories that we should all read and insist that our children and children’s children do too, so that they can become polymaths – or even know what a polymath is.

Those are writers with a capitol W. Men and women who have recorded and gone on to shape history. Great men and woman who have brought life and light and provided hours of entertainment and escape to millions. Some have made millions others not.   Some are making millions today, most not.

Nah, I’m not one of those writers. Not even.

I write because I love to read and think.

I think I think too much and those thoughts have to go somewhere.

I write because I have a story to tell.

As one of my all time favourite authors Anne Lamont puts it: “Good writing is about telling the truth. We are a species that needs and wants to understand who we are. Sheep lice do not seem to share this longing, which is one reason they write so very little. “

Oh Anne Lamott, I want to be just like you when I grow up.

I have none of the write formal training at all. That’s if you exclude our high school English teacher, a certain Mr. Dennis Butler, who couldn’t last even one lesson without a cigarette. So much so, he’d get us all set up between the comma and the predicate and dash out for a drag on one of the half burned, extra strong Lucky Strikes (or was it Texans?) he kept in his suit pocket – same place he kept pieces of chalk, often mixing the two up. Much as he tried to explain and instruct off a black board with a cigarette butt in his hand, I’m sure he tried to light up and smoke the chalk too. Perhaps that’s why he spoke in deep gasps, out the side of his mouth and wrote comments such as “that’s a python of a sentence Suki “(his collective name for girls) under our essays. He stank of stale, sour smoke and I thought it most unfair that he could give the boys six of the best on their rear ends for smoking behind the toilets when he was so blatant a partaker too. I know he taught me very little, other than never ever to smoke – because it doesn’t make you smell nice.

My father was an English and Latin teacher who adored books and wrote and spoke beautifully. He understood syntax and root words and had incredible recall of the when, where and what of each book he ever read. The most distressing time of his life was when his beloved home library burnt down and he felt his whole life had gone up in smoke.

I got two years worth of English credits (thanks guys) when I did my Theology degree because they could tell I had a command of the English language, but still had to do Greek grammar – arghh purgatory. I recall getting an A for the didactics of English when I studied to be a teacher.

Rah, rah, whopeee I can teach it, but can I write it?

And can I call myself a writer?

I don’t know the answer to that, but what I do know is ….

Take it or leave it as you wish but allow me to humbly tell you that my very first bit posted in News24 Voices yesterday has been seen 8237 times in the space of 24 hours and has a lively debate under it.

What? Believe me there is none more surprised than moi! And to think I sat on that narrative for more than a week with every waking moment paralyzed by the fear of pushing the publish button.

Perhaps then, just as a leader has followers, I am a writer because I have readers.

I’ll settle with that.

I AM A WRITER.

And if you care to make the reader numbers registered on News24 Voices “Expat Haters – please don’t!”  go up, you can do so by clicking and reading it here

And…I am a writer because I just wrote! 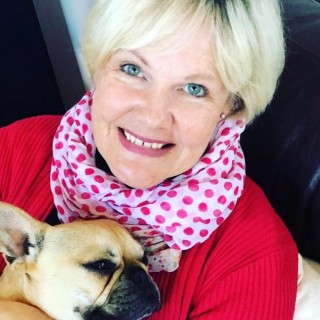 Hello there, I am so honoured and happy you stopped by. I pray you leave my pages with your heart lighter and brighter but mostly I hope you’ve had a good laugh - for surely the world needs as many laughers as it can get.